Sometime before we bought the Rock Farm, the garage was filled in to make a sun-room off the house.  Whilst this has made the house a much nicer place to be, it has done nothing for the protection of our cars.  In winter the frost forms thickly on the windscreens, making early morning starts a misery, whilst in summer the searing heat makes the cars extremely uncomfortable until the air conditioning starts to win the battle.

When a friend offered me a second hand carport, late last year, already disassembled, I quickly accepted. We soon had the steel delivered,  unloaded and neatly stacked… where it then sat for nearly 11 months. 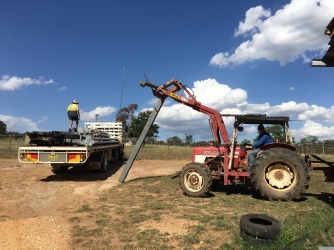 In the meantime life got in the road, and the carport sat and waited.  During the next few months we brainstormed where it would go, and we ended up moving its planned location several times until we settled on building it at the back of the house – off the rarely used formal front door.

Once the site was settled, we hired our water pipe finding friend, Jimmy, to bring his Kanga and dig the 450mm diameter foundations.  The Kanga made short work of the digging (The hint of rain) – and saved me a whole heap of time.  I had to make sure the footings were at the right height.  Being second hand, all the poles were different lengths, and their overall height set the pitch for the roof.  With fingers crossed, we poured in the concrete.  I was assisted by one helper, who worked out that being a concreter’s labourer was off his list of future careers… 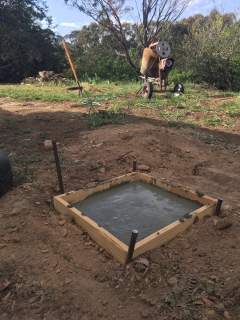 Once the concrete had gone off, it was time to drill the anchors for the posts.  I used the largest bolts I could find and chemically set them into the pads using a chemset kit.  The poles were easy to stand up, but I was really glad to have my old man to advise and the tractor to do the heavy lifting of the main steel beams. 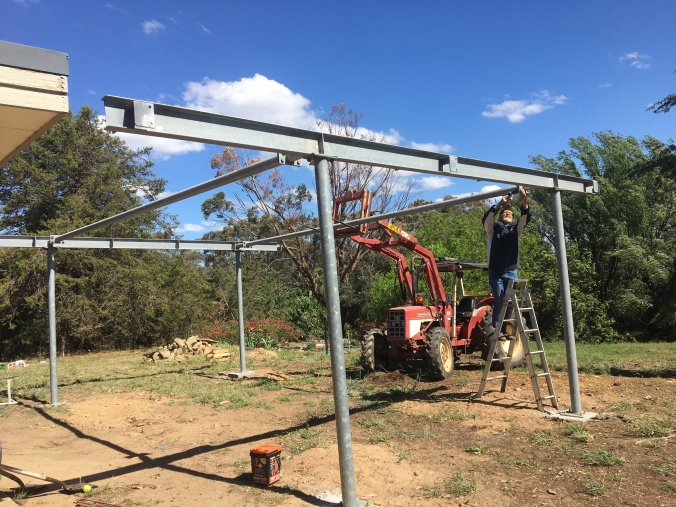 Next Jo and I put the purlins up.  Much lighter than the main steel structure, we had to manoeuvre the purlins over the cross bracing.  Mytle, the old red truck not only made moving everything a lot easier than carrying it down from the shed, but it also doubled as a ladder! 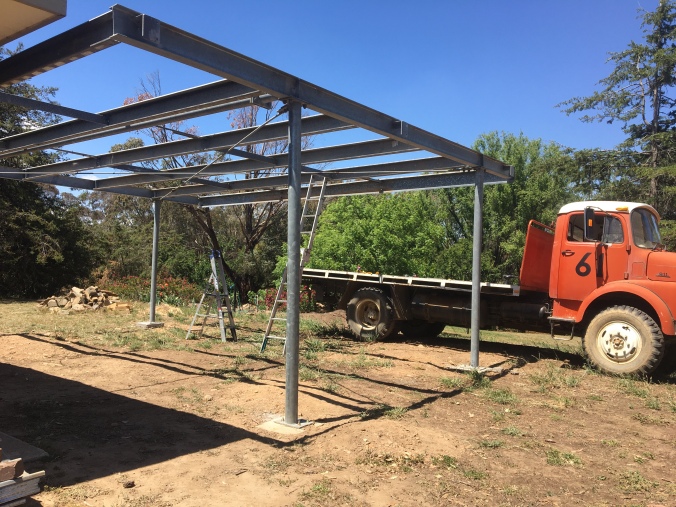 We had to pick our timings to put the roofing iron on.  The winds that have caused terrible fires up north have steadily dried everything out around us.  As the winds were due to pick up from 9am on the day we planned to put the roof on, we got up really early and by 6am were laying down sheets.  And I am so glad we did, as the wind came in exactly as the forecast predicted. 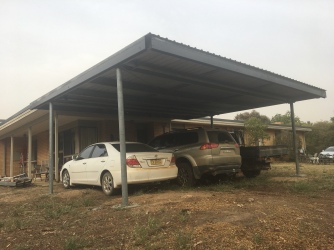 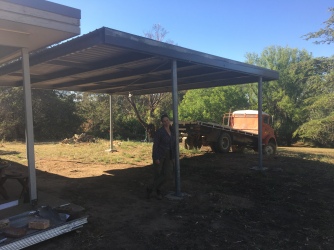 The end result is a fantastic, re purposed three bay carport!  We are really pleased with the outcome.  We have a little more work to do, finishing off the trim and installing the gutters, but the shade on the recent days above 39 degrees has just made life so much more bearable.

A special thanks to Dave, whose generous offer created lots of discussions, deliberations and pacing around the house, but ultimately has made the Rock Farm a much nicer place to live.

Now we just need to build the driveway to the new carport!

The chance of decent rainfall before the grass becomes dormant over summer has all but passed on the Rock Farm.  Dry westerly winds have persistently blowed over the past fortnight, removing any residual moisture from the ground.  These same winds have fanned bush-fires that are causing so much devastation in the north of NSW. As I write, over one million hectares of NSW has been burnt – and we aren’t even half way through November yet.  These fires are unprecedented in their intensity this early in the bush fire season.  But they were not un-predicted.  The biggest question is can we shape our environment to protect us from future fire events like this.

We are starting to understand that the Australian landscape has been carefully managed for tens of thousands of years by the Aboriginal people.  Small low intensity ‘cool’ fires created a woodland landscape that was recorded in journals and art of the early European explorers. These woodlands prevented the large scale devastation wreaked by huge fire storms.  There is plenty of evidence to suggest that our bushland National Parks have more trees now than at any time since human habitation of Australia, some 30000 years or more ago.

Our aim is to create a woodland like setting on the Rock Farm, working with trees that are already established here, and planting new trees.  We want to create a sustainable agricultural enterprise that creates an income and a food source whilst improving the health of the soil.   This doesn’t mean returning the landscape to native bush-land, or what it looked like before European settlement, but something we can use towards the future.

Our plan on the Rock Farm, as most of you know, begins with trees.

With 1.3% of the state not in drought or drought affected (https://edis.dpi.nsw.gov.au/), it is a hard time to get trees established.  Our ground has very little subsoil moisture and our stock are getting hungry.  We had a few oak seedlings (quercus lobata and dentata) still in pots, we knew we had to get them in the ground if we are to have any success at all with them.

The tractor is an extremely useful tool to prepare the soil for tree planing.  I ripped a line beside the driveway to create an avenue of oaks.  Unfortunately I worked out too late that the tractor requires a little less air and a little more diesel in the fuel tank.  After refilling the tank, I couldn’t get the tractor to start.  After much troubleshooting following the fuel lines, I determined that I had a blockage in the line from the tank itself.  45 years of crud and muck had blocked the tank outlet.  A few good pumps from a bike pump back up the line seemed to clear the blockage, and after bleeding the lines again, we were back in business. Monty the horse found the whole exercise most entertaining! 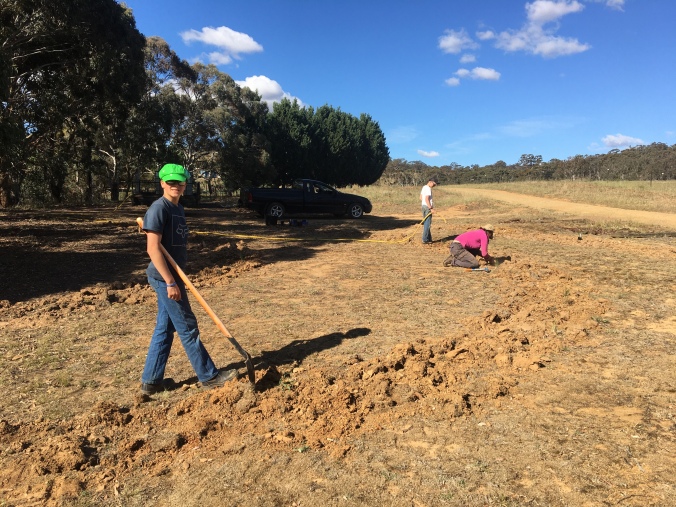 On the other side of the drive we planted a stack of native shrubs.  Native Callistemon, leptospermum and melaleuca were planted to provide flowing shrub food source for bees.  This soil looked particularly bare and windswept.  We hope the shrubs are able to get established.

We planted a couple of the remaining oaks in the paddocks.  It was a wonderful way to spend the afternoon with the family.  Although you don’t want to be the one who forgets his hat… If you do, you get to wear the bright green Mario Cart Hat!  We will water the plants every fortnight over summer with the IBC tank towed behind the go-anywhere-a-4wd-can falcon.

With the water tank on and helpers available, we also gave a drink to the other trees we have planted around the place.  Last time (Update on trees and rip lines.) you may recall I was cursing hares, who had snapped off our yellow box (eucalyptus melliodora) seedlings.  I had placed some tree guards around the snapped off bases and gave them a water.  I was extremely pleased to see that new shoots were coming from the base,

And why bother planting trees, especially during one of the most widespread droughts ever recorded?  Well, a walk through our small paddocks shows the results of the vision of the former owners.  In the shade from large deciduous trees is grass.  Green growing grass…. can’t get any more reason than that.

Walking around the Rock Farm this week, I have been struck by how similar to January the weather is.  Dry grass crackles underfoot, and in many areas the earth is dry and hard.  Hot dry days have us monitoring the Fires Near Me app, with a guard zone set 50km around the property.  We have been watering newly planted fruit trees in the garden in a desperate struggle to keep them alive, but I also knew I needed to check on some of the trees we had planted in the paddock.

We planted some Hakea and Yellow Box trees along some rip lines in early August.  The rip lines hold some extra moisture and we thought would be a good place to pant the trees.

After planting the seedlings, we watered them a few times to get them going.  It was good pre-season maintenance for our portable water tank, even if it looked a bit like a moonscape at the time.  A small shower of rain a couple of weeks ago had turned the grass in the rip lines green, and encouraged the weeds to grow.  Sadly it wasn’t all good news.

With occasional watering, the Hakea or Needle bush have responded well.  They are optimised for Australian conditions, and are naturally unappealing to grazing stock such as cattle or kangaroos.  When they grow, they provide habitat for many of the native birds that have shifted into living in the weed Sweet Briar.  Once we get these Hakea established, we will re-double our efforts to remove the Sweet Briar.

Unfortunately the Yellow Box has not fared so well.  It would seem a hare has taken to all the plants not in guards, and chopped them off a few inches above the ground.  A couple of the plants had clean cuts, with some buds below the cut, so we installed a guard and gave them a good water.  Time will tell if we have saved these trees.  The trees in guards were alive – but only just, and we hope a couple of good soaks will pull them through.

The rip lines have broadly been a success.  I had spent a fair amount of time in autumn and winter dragging an old ripper along contours:  (See https://rockfarming.com/2019/03/20/ripping-lines-for-soil-health/ ).  It was an experiment to see if the lines would allow water to penetrate the subsoil, and to aerate the soil.

The change on the rocky slopes is in a word remarkable. 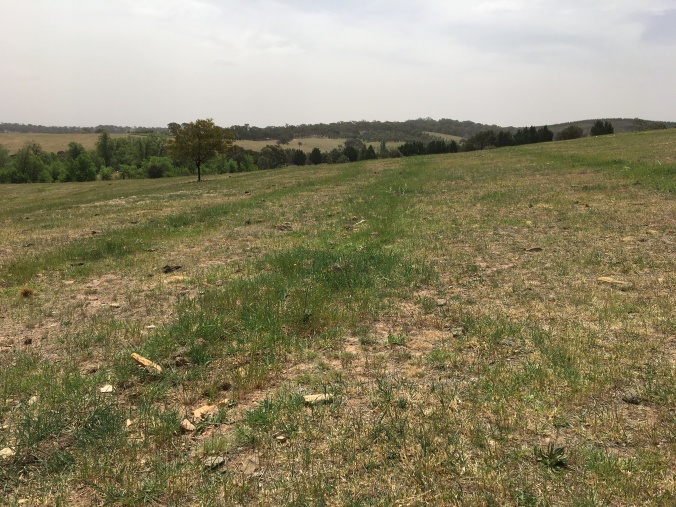 The rip lines are clearly visible by their lines of green growing grass.  Between the rip lines, the grass is struggling to stay alive and the clover has all but turned up its toes.  With rain forecast for tomorrow, I hope that every drop that falls makes its way into the ground.  This is especially the case for short sharp summer thunderstorm cloud bursts that see a large amount of water fall quickly and run off before it soaks into the ground.  This might not be ideal for our dam that is getting lower and lower, but the grass is what the cattle and sheep need to eat.

It is great to see the boys and girls are in good health and condition.  Our calves and lambs continue to grow and are all nice and quiet.  The lambs are responding well to living near the house and are starting to come up to me when I appear with a bucket.

It might already feel like summer, but we are really pleased with some of the progress we have made in keeping the grass growing for a little longer on the Rock Farm.