The first major project was to divide our large 5.5 hectare flat paddock into three smaller paddocks of around 1.8 hectares each.   It involved the construction of two new fences, the first of around 150 metres, and the second of around 200 metres.  For the first fence, I only had to install one new strainer post, but the other section required two new posts.  Good job the boys were at home with time on their hands – I have never found installing strainer posts or star pickets so easy!  The boys even stood up and clipped on the hinge joint in record time.  I think they enjoyed working outside – but are secretly looking forward to online lessons resuming so they can get a break from all the farm jobs. 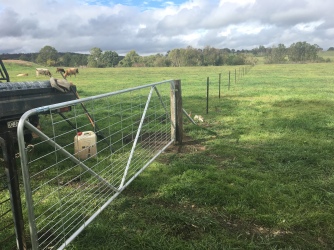 The reason we have decided to split this paddock is two fold.  Firstly it allows us to intensively graze the smaller paddocks – thereby assisting in our weed management.  The cattle eat most of their favourite grass, and as they go, they nibble and trample the weeds.  We can then either chip or slash any remaining weeds once we move the cattle out onto fresh paddocks, hopefully improving the pasture as we go.

The second reason we have split the paddock is to allow us to install shelter belts along the new fence lines.  This will, in time, provide protection to the paddocks from the westerly winds.  The shelter belts are a future project and we intend to plant a variety of shrubs and trees in new stock proof tree guards.

New paddocks are useless without water.  Thus the next stage of the project was to install 150 metres of 1-1/4 inch poly pipe.  Because of the frosts we get in winter, and harsh sun in summer, we buried the pipe.  I don’t have a fancy pipe installer – but I do have a ripper on the tractor and two teenage sons.  The boys cleared the rip lines and I buried the pipe.  A job that would have taken me all day on my own was done in little over an hour.  I was thrilled we were able to get so much done in a morning.  We have a couple of old bathtubs we will install as water troughs once I get all the fittings sorted.

In the meantime we have still been chipping thistles – one little triangle paddock had a really bad patch that we have spent ages working on, with very little progress.  It was time to call out the big guns, so I fitted the mulcher to the back of the tractor for the first time in two years.  Thankfully with a bit of grease and WD-40 on the moving parts, it spun back to life and mashed and mulched the majority of the weeds.  If we can do this a few times and prevent the thistles from seeding, this paddock should turn around. 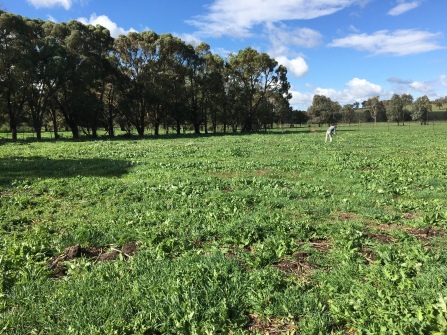 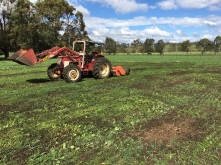 Thistles aren’t a new thing on the Rock Farm.  When we moved in to the Rock Farm, the adjoining 1.8 hectare paddock on the flat was full of thistles.  I slashed them a couple of times over the summer (https://rockfarming.com/2018/01/04/managing-thistles-on-the-new-farm/).  I am pleased to report that this autumn I was able to chip out the handful of remaining thistles in this paddock in around an hour.  The process works – and with a machine such as the mulcher, it is quick and easy to do – and nutrients remain in the paddock and feed the soil.

With the weeds taken care of (well in this patch at this moment), I had a few broken wires to fix around the place.  The neighbour’s beautiful helpers came down to offer advice and redistribute loose items in the back of the ute such as pairs of gloves and containers of wire clips.

A gorgeous distraction they were – but as far as helping, I’ll take my boys any day of the week!