It has been a hot couple of weeks on the Rock Farm.  We have been busy watering trees, feeding cattle and trying to stay cool.  The bush-fires have been an ever present threat.  This instalment comes from the (not so) Little Fisherman.

Due to the weather, we have not been able to work much on the float since the other Little Helper did his last blog (The Little Helper’s Holiday Project (Part 1)).  The last couple of days have been total fire bans with one of the days even being a catastrophic fire danger day.  But the next day brought some relief.  The temperature was set to be a maximum of 28 degrees Celsius, and the fire ban had been lifted!

We decided to use the break in the weather to replace some of the rusted frames in the float.  Our replacement bar for one of the more rusted floor sections, was slightly to small and did not have the strength needed of it (Dad will take more care to purchase steel of the correct dimensions next time).  Despite this, we still managed to replace some of the other frames on the side of the float. 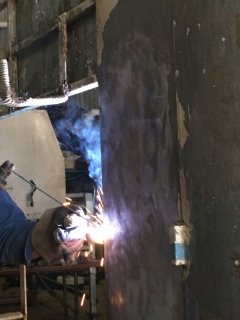 This turned out to also be the perfect time for me to hone my grinding skills…  Although it took a while, I managed to successfully remove one of the old bars and clean up the cuts, before cutting a new piece (A tad to long).  I also asked dad if I could weld the bar in place, but after watching him struggle to weld the thin steel we decided that I would do more harm than good.  Instead, I took my new-found grinding skills to finish making my mother’s Christmas present. 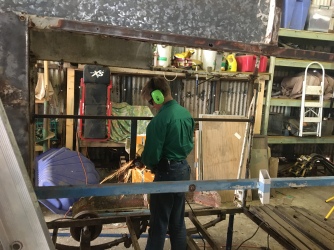 After the horizontal struts were in place, we realised that we needed to replace one of the vertical supports.  This meant that dad had to cut up some of his pre-existing welds to put the new piece in place.  Let’s just say, I don’t think that he was to happy with having to re-weld the weak steel. 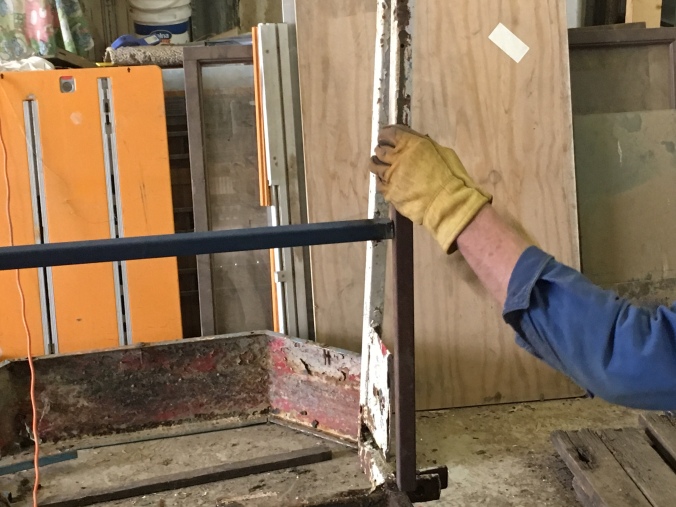 Meanwhile, the little helper was cleaning up the tailgate with a wire brush and a lot of elbow grease.  After he had finished polishing off the tailgate, he proceeded to rust-proof all the exposed metal he could lay eyes on with some ‘Rust Converter’ (phosphoric acid).

A couple of days later, the weather cooled down again.  We took this opportunity to remove the fibreglass section of the roof.  This proved somewhat difficult as many of the rivets where rusted in place.  We ended up drilling out the rivets.  After some effort we got the roof down, where it now lies, waiting to be sanded, patched and painted. 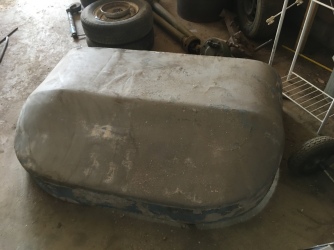 All in all, we have made many very important structural repairs and have begun looking at the roof.  Hopefully the next blog will be about reattaching the roof and possibly finishing our structural repairs.  We are looking forward to being able to start re-assembling the body of the horse float soon.