A couple of months ago we started a project on the Rock Farm to make a Potting Shed, to store Jo’s gardening bits and pieces.  In order to build Jo’s She-Shed, Jo had been collecting second hand iron, fence palings, doors and windows for a while.  With the other shed getting cluttered, the timely visit of Jo’s parents and my brother made the time was right to turn her plan into reality.

Whilst the shed was to be clad and finished with recycled (upcycled?) materials,  for ease of construction I requested new material be used to build the frame.  Jo was keen to get stuck in and do most of the construction herself, which was fantastic.  Although I must admit she did seem a little too comfortable with the nail gun! 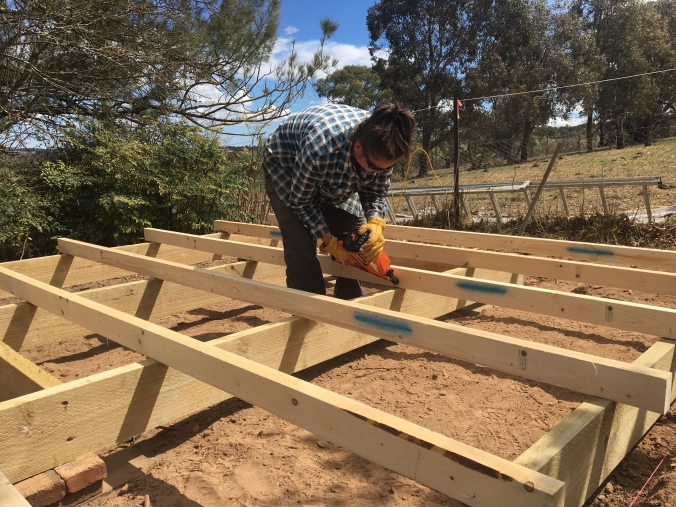 The frames were fabricated in sections on the floor of the shed, and brought down on the back of Myrtle, the big red truck.  Jo’s dad, a retired engineer, ensured that everything was braced and square.  As more and more bracing was added, I felt confident that the whole structure was extremely solid. 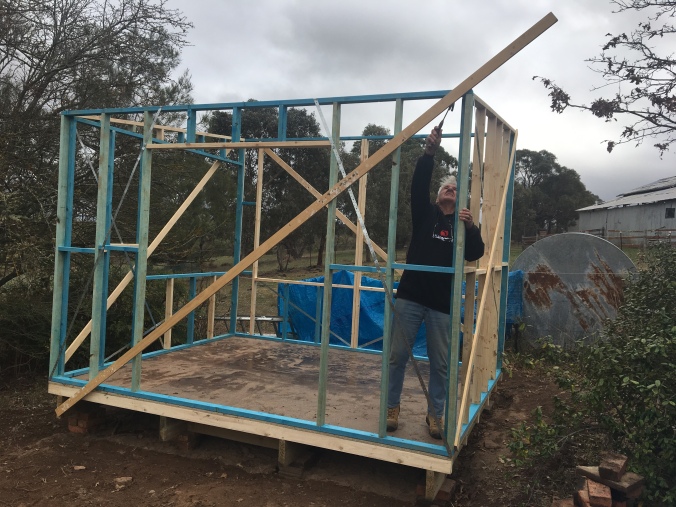 We wrapped the frame in some excess sarking we found in the shed.  This should reduce the drafts.  We haven’t insulated the she-shed, but we did later line the shed with plywood sheeting. 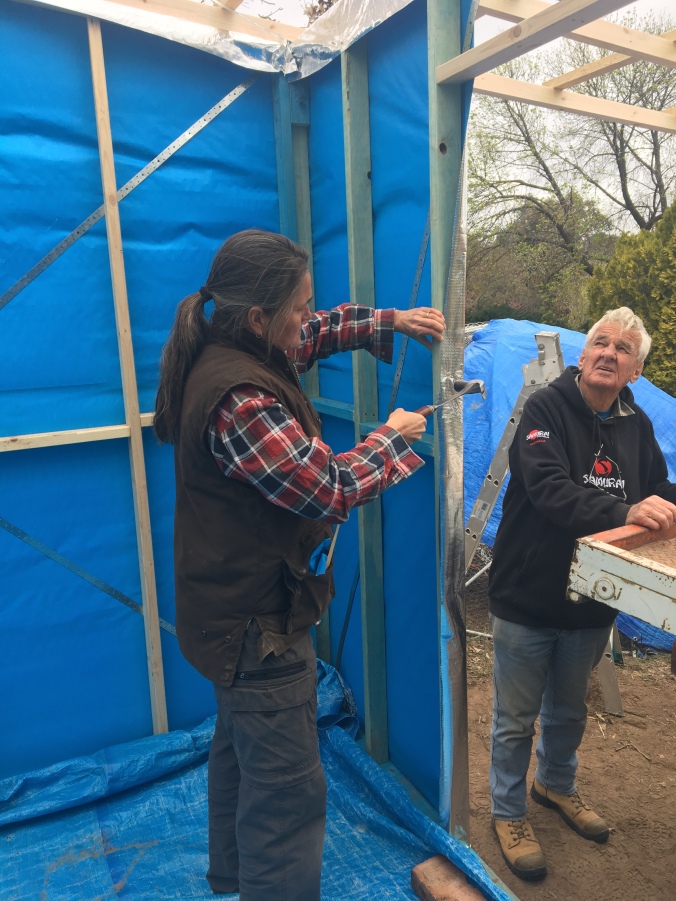 We sourced the windows from the local recycling yard for $20 each.  Our original design was modified as the windows we initially chose didn’t fit in the horse float.  These old timber windows were extremely heavy, and I appreciated my brother’s help to lift them into position. 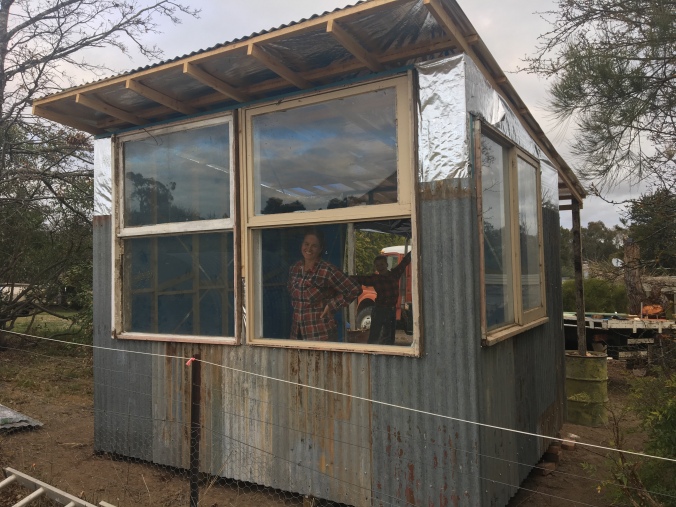 The cladding was a combination of old Lysaght Corrugated Iron, and old hardwood timber palings.  The timber was rather easy to split, but mostly held up to to being attached with galvanised nails. 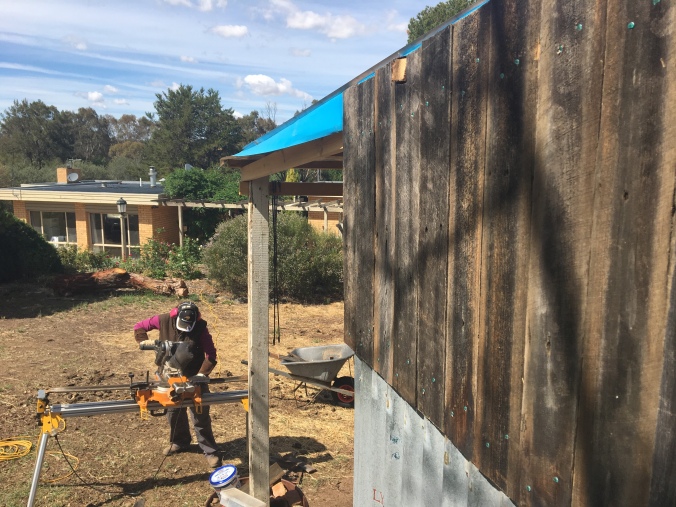 We found a couple of old posts for the front lean to in a paddock.  Unfortunately they were too short to reach the ground, so we improvised with a couple of old 44 gallon drums filled with old broken bricks.  The end result is an extremely solid structure I am confident won’t go anywhere for a long time. 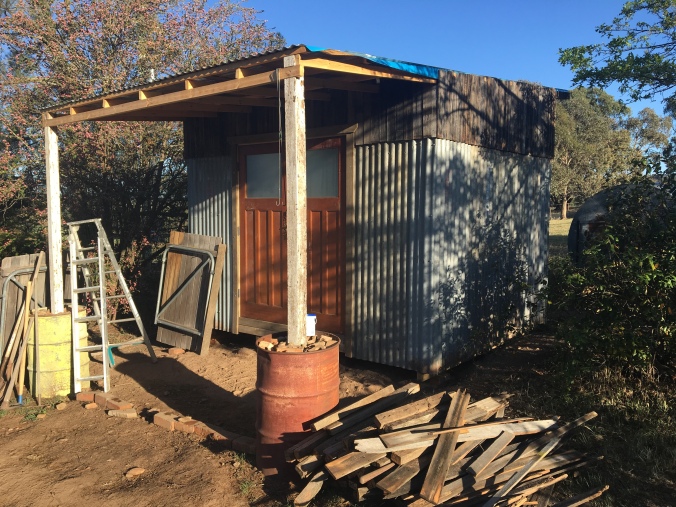 The doors were out of an old office block.  Again, they are extremely heavy solid timber doors that cost a pittance at auction.  We bought some new door furniture as none of the original mechanisms worked.

We have since put some flashing on the roof and installed a gutter.  The last job is to pave the front area and build a step into the shed.

The internal fit out was left to Jo.  We found an old table lying in the paddock under an Elm tree.  The timbers of this ancient table were protected somewhat by a galvanised sheet placed over the top.  After removing the resident Huntsman and Redback spiders, we brought the table into the shed. 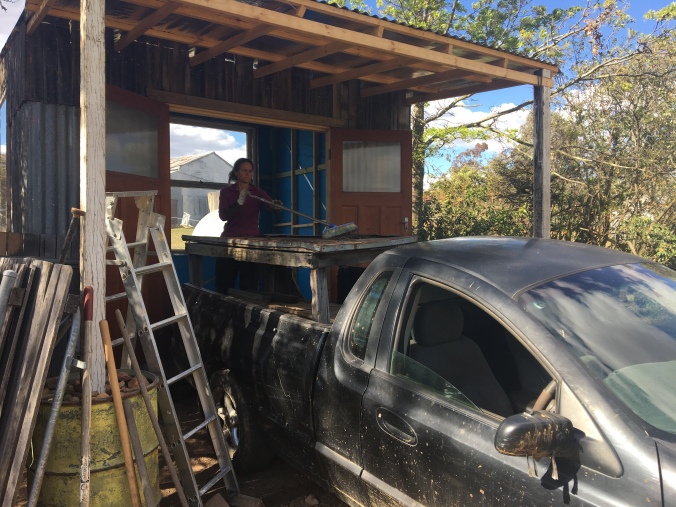 I am glad we saved this table from the elements.  I often wonder with old pieces such as this what their history was.  It is a little wobbly, but we were able to prop it up and make it reasonably flat. 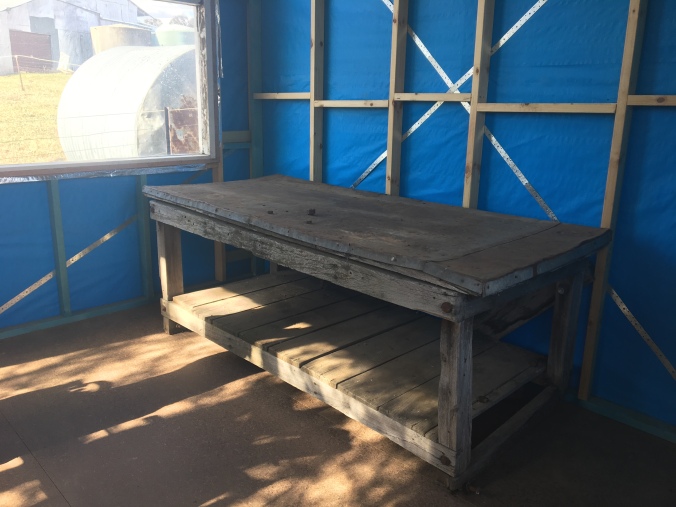 It didn’t take long though and the she-shed was rearranged.  Old bookshelves and dressers that had been cluttering up my shed were relocated and set up in the newly lined she-shed.  Jo has since slowly set it up with a place for everything, and I am happy that I have space back in my shed too.  It has been a great little project that we both have enjoyed working on. 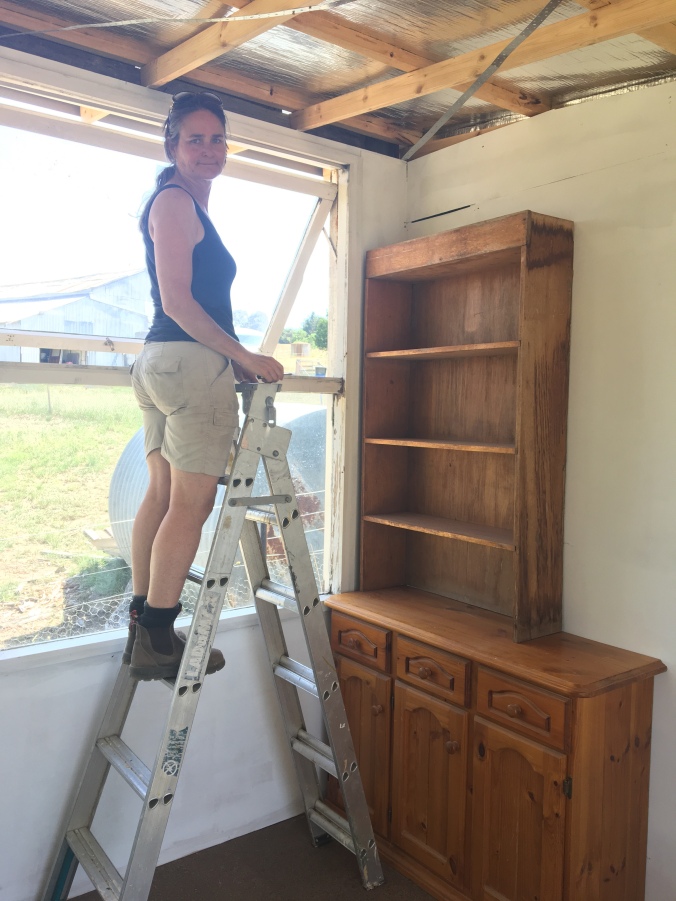 Which means that now I’ll have to start work on the next project… the carport.

One thought on “Every woman needs a She-Shed”