Last week was a mixed bag on the Rock Farm.  We enjoyed a glorious 12mm of soaking rain. A fox killed all our chickens.  Our sheep disappeared and we found all them roaming the neighbour’s place. The steering arm fell off the tractor. Our ram got in a fight with an other neighbour’s ram, and in a sickening head butt, our ram killed their ram.  And one of our heifers made a terrible mistake. 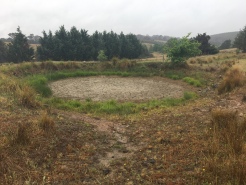 The rain well worth celebrating.  Whilst it wasn’t enough to fill our parched dams – it was very much needed – even if the dog wasn’t so sure!  The little burst will hopefully allow our ryegrass and cocksfoot grass to set seed, even if it came too late for our clover.  And there is nothing like mustering recalcitrant sheep in the rain the remind you why you love this farming game!

With feed stocks dwindling, we took up the kind offer made by John, the heifer’s breeder, to return them to his farm in the Southern Highlands to make acquaintance with one of his young bulls.  The heifers are well used to the routine now of moving around the Rock Farm.  They quietly made their way into the yards for a short overnight stay before being trucked.

After all the dramas earlier in the week, this part was all going to plan.  It was almost too easy I thought.  I shouldn’t have even thought those words.

My troubles began when I moved some of the heifers into the race to drench them prior to the truck arriving.  No sooner had I turned my back, than one of the heifers tried to escape through a narrow personnel escape opening.  I still don’t know how she squeezed her shoulders through the gap, but it was immediately apparent that her hips weren’t going to follow the rest of her body. 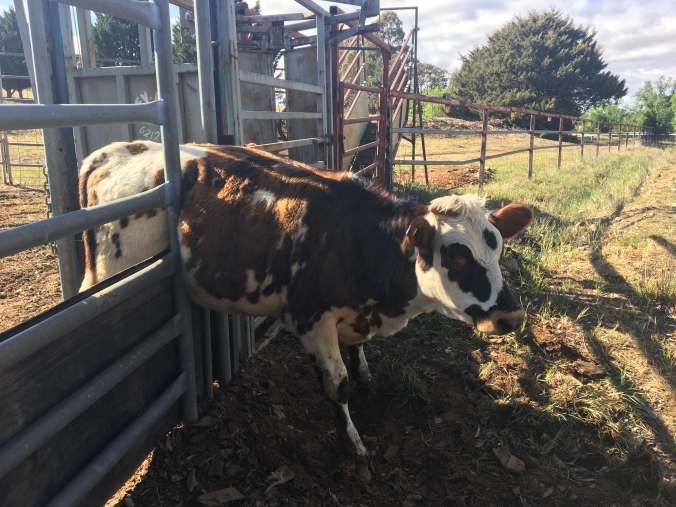 She was stuck.  Properly stuck.  And then the audience arrived in the form of my wife Jo, and Jimmy who was carting the cattle.

After a couple of attempts to lift her back legs and pull her through, we realised we were down to only a couple of options.

I raced up to the shed and grabbed a cattle sling, designed to lift cattle that are unable to stand.  It was when I tried to start the tractor, I realised I’d left the ignition on, thereby flattening the battery.  I am sure there was a very localised blue cloud forming over the Rock Farm at this time.

After eventually jump starting the tractor, we rigged the sling and started lifting.  We tried initially to lift her by the back legs, but that didn’t help.  We then put the sling under her chest and tried again.  With a lot of pushing, pulling, and twisting, combined with a good dose of luck, we eventually twisted her on her side.   Jimmy was able to wiggle her hips through the gap and she was free.

It wasn’t all good news though, the young heifer was very sore, especially in the right hip.  We made the decision that she was not fit to travel, and put her back in the yards.

I was too spent to take photos of the other girls on the truck, but the rest of the journey for them went without incident.  They were met by their new boyfriend, who was eager to make their acquaintance, a good looking young bull with plenty of Charolais breeding in him.

We kept the remaining heifer under close watch.  Thankfully she improved dramatically over the next few days.  After a week, she is walking without a limp. I hope to transport her to meet up with her herd, but it is hard to justify carting her on another truck.  I figure it is time to see if we can train her to use the old horse float.

To that end,  I brought her back in the yards, and moved her water trough and hay into the back of the float.  Her initial response was understandably wary.

But within 24 hours, when checking on her water, I spied her comfortably eating inside the float.  I will let her spend a few more days getting used to the float, before attempting to move her.  I will also fabricate a couple of bars to prevent her from jumping out over the tailgate before we move her.  That would be disastrous. 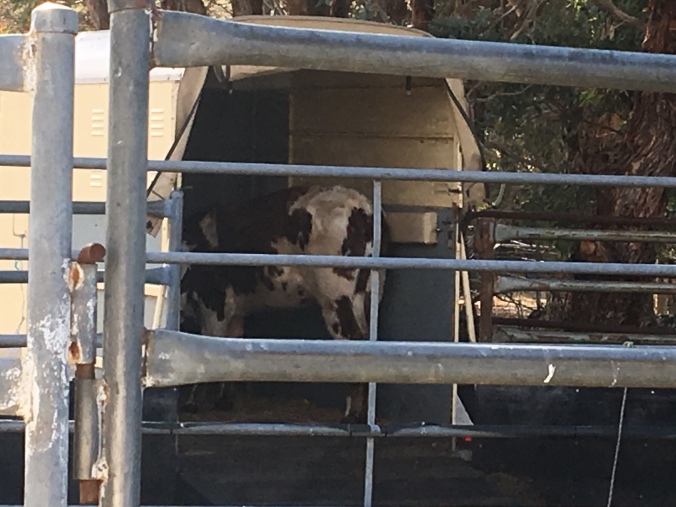 Of course you don’t get to do something this crazy without earning yourself a special place in the family’s heart.  Nor do you remain anonymous.  So the family decided to name our escaping heifer Miss, short for Terrible Miss-Steak.  I hope it is the one and only occasion she lives up to her name!