The new Rock Farm was set up originally to spell race horses.  As such its paddocks were all made with plain wire.  Later cattle were run on the property, and an electric wire or hot wire was installed.  Sadly running sheep wasn’t a concern, and we found very quickly that we would need to work on improving the fences quickly in order to rotate the sheep through the paddocks on the farm.

I have decided that the best thing I can do it work on a paddock at a time, and concentrate on making it stock proof.  I chose a 5.6 hectare paddock, that despite its small size has over 1 kilometre of fencing around its perimeter.   The first thing to do was remove the branches that had fallen on or were about to fall on the wires.

Ideally I will install a stock mesh on the fences, but for now the cheapest and easiest solution was to fix up the existing plain wire fences. 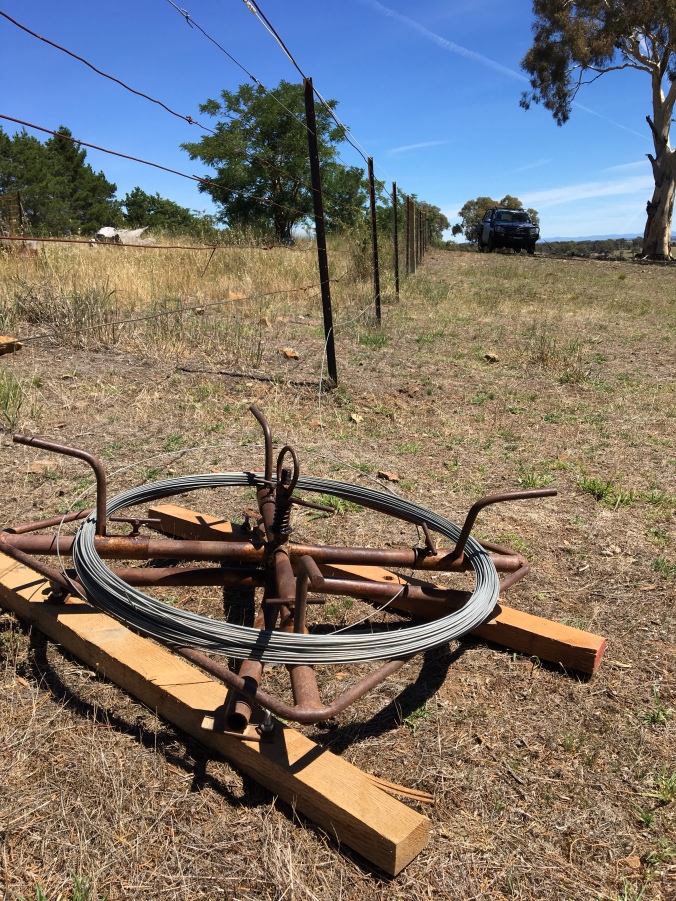 On some sections of fence I had to install a bottom wire through the bottom hole of the star picket.  This wire in most fences would  be at ground level, however these pickets are barely in the ground.  Every fourth post is a concrete post that has been dug into the ground, providing most of the stability required.  The wire spinner is invaluable when it comes to running out wire on your own.  We found this old one behind the shed and after replacing the timbers and a few days soaking in WD40 it was restored to normal operation. 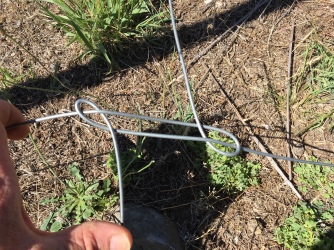 In other sections of the fence, the bottom wire was broken.  This required me to join wires and strain the sections.  One of the best knots for joining wire is called the ‘Figure of 8’, for obvious reasons.  For some reason, I found it difficult to make, having to really think through it every time I made it.  It is a great knot as it doesn’t reduce the wire’s strength.  Thankfully I got better as the day went on.

Edit – The image above shows the correct figure 8 knot… it seems I didn’t get it right after all….

To strain the wire tight I used an old set of Hayes wire strainers.  The design of these strainers hasn’t changed in over 100 years.  They are simple, reliable and need very little maintenance.  The amount of purchase you can achieve with these strainers is immense, and once you have the technique, they are incredibly versatile.  I went around the paddock, straining the bottom two wires, which are the ones the sheep will put the most pressure on.

And then it was a simple case of bringing the sheep in.  A nice bucket of fresh oats, and a few loud “C’m’on” they came running… well almost.

Seventeen of Nineteen sheep followed me excitedly to the new paddock.

One ewe and her lamb eyed the open gate with suspicion and disappeared back into the paddock.  I have had a run in with this ewe before – she was particularly difficult to muster when we moved here.  In case of such an eventuality I had the boys ready on their four stroke steeds, and I thought they would have her rounded up in no time.

I was wrong.  For the next hour and a half all the whole family was pressed into service to try and push her out of her paddock.  And she refused.  Just as I was on the point of finding a very permanent solution for her lack of motivation, she must have read my thoughts.  She trotted through the gate calmly as you like, and continued up the lane and into the new paddock.

By then it was already well past 30 degrees, and the forecast for the following day was going to be just shy of 40 degrees.  We decided that the Rock Farm could do without us for a day, and decided to take the next day off and make a dash to the coast. 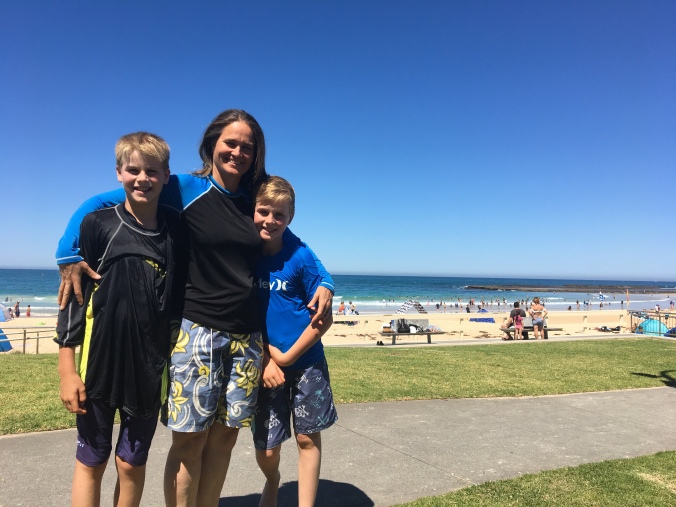 As much fun as swimming in the dam on the Rock Farm is, it doesn’t beat the salt water waves of the coast.  Sometimes you just gotta take a road trip!

One thought on “Fencing and moving sheep”