I have often been asked what is the best vehicle for a hobby farm?  And the choice is bewildering.  There are side by side ATVs, quad bikes, tractors and even 4wd utes that can all be mighty handy on a small farm.  It depends a bit on your terrain, but if you don’t need a rock crawling 4wd, then you have a wide variety of vehicles to choose from.

For us, the vehicle must be:

Our farm vehicle met the first and most important criteria.  It was cheap, very cheap.  In fact, we inherited our paddock basher by good fortune when we bought our farm.  It might not have been our first choice in farm vehicle – but it has proved to be every bit up to the task.

The mighty Mitsubishi Mirage with its trusty 6×4 box trailer has had a rough life.  One time wrecked in a hail storm, it became a regular commuter running up well over 300 thousand kilometres in its on road life.  At some stage it finally failed registration, and became a farm only vehicle.  It continues to amaze me with its amazing feats of strength and endurance.

The mighty Mitsubishi Mirage – Could this be the best farm car ever?

I have often said what it lacks in ground clearance, it makes up for with enthusiasm.  The small wheels and minuscule ground clearance is a bit of a risk, but we have only managed to get it stuck twice.  Usually a bit of right foot pressure (sometimes in reverse) is enough to get us out of mischief.   It also is able to use many talents you wouldn’t dare use on a road registered vehicle, such as carrying 8 metre lengths of timber… on its roof!

It can carry long loads with ease

Of course things don’t always go to plan.  I did have to replace the air cleaner after it became fully blocked.  The fuel filter has been bypassed, and the main engine fuse was repaired with a bit of wire (I did replace that with a new fuse to reduce the chance of starting a fire).  Surprisingly the engine still starts first go, and it doesn’t use any oil.  The fan belt is looking very shabby and will need to be replaced soon…. when it finally snaps.

At some stage in its past, it did suffer a major hit to the right front wheel bending the axle back.  This eventually led to the steering arm falling out one day.  It was repaired in the best bush mechanic tradition with some fencing wire.  Unfortunately it will never steer quite the same again, but as it rarely gets above second gear, it is unlikely to be a real problem.

It is easy to maintain. If it can’t be fixed with either of the three hammers, then it will be retired.

The trailer is nearly permanently attached, and is nicknamed the wheelbarrow.  It is certainly used as such, moving garden prunings to the paddocks and collecting fire wood.  The floor is all but rusted out, but some rubber conveyor belt keeps the good stuff in the trailer.  The frame of the trailer has also been reinforced with an old bed frame – making it as strong as the day it rolled off the factory floor… er… almost. 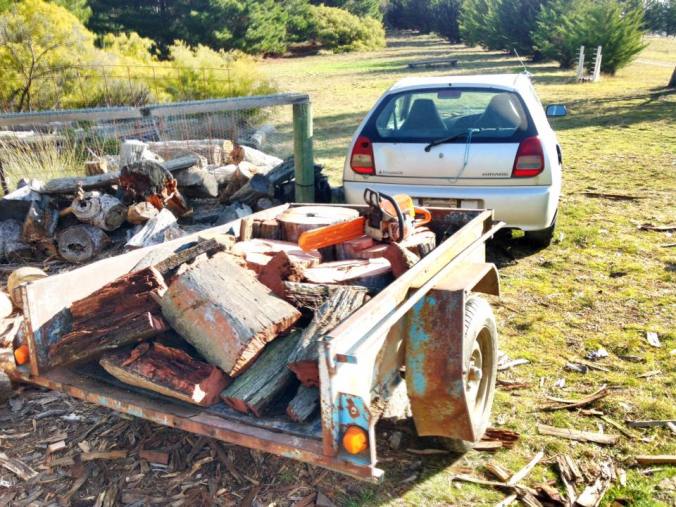 The Wheelbarrow is put to use

This poor car has been used as a ladder when lopping high branches.  It has jump started the lawn mower on the odd occasions it is required on the Rock Farm.  It is used to check the fences, collect firewood, haul water and even move rocks.

But perhaps the best thing this car has done is allowed the Little Helpers the opportunity to learn to drive.  I have now been demoted to “Gate Opener”, as the Little Chauffeurs drive me around the place.  It took a bit of time for them to master the clutch – and we still struggle with hill starts, but both of the boy’s feel super important when I ask them to take me around the paddocks.

The little chauffeur standing on the roof – just because he can

It is simply a lot of fun!  The fact that I don’t mind if they ride the clutch for a bit, or scrape the side against some shrub means that we can all have a great time.  And that is what makes this the best farm vehicle ever.

I have been demoted to Gate Opener… and I love it!

2 thoughts on “Best vehicle for a hobby farm”